Before Homo sapiens, the smaller, chimp-like Homo erectus likely slept elevated in trees in order to take refuge from predators. Once early hominids discovered fire, researchers believe the early humans transitioned to sleeping on the ground since the fire would ward off any predators in the night. This is where the roots of the mattress began.

The earliest known form of a mattress dates back to approximately 77,000 years ago. It was discovered by archaeologists in a rock shelter located in Sibudu, South Africa. It was comprised of various types of grass and leaves, some of which were natural insect repellent to combat nuisances like mosquitos and other insects.

Between 3000 and 1000 BCE, other cultures in early history began to adopt elevated sleeping surfaces as humans and civilizations evolved. In ancient Egypt, these raised beds were typically made from wood for protection from snakes and rodents. Raised beds were also helpful as a way of regulating temperature and to protect against cold and heat.

Despite hardwood trees not being native to the area, Egypt had a surplus of funds during this time that allowed them to import hardwoods and metals. While wood was the material of choice for modest beds, more affluent citizens owned beds that were adorned with gold, jewels, and ebony with wooden “pillow” and linen sheets for added comfort.

Much like the people of ancient Egypt, early Romans also elevated their mattresses - so much so that they often needed a ladder to reach them! Most Roman beds were made of wood, metal, or ivory and supported by ropes or string. For commoners, mattresses were comprised of hay while wealthy Romans stuffed their mattresses with multiple layers of more luxurious materials like wool or feathers.

Greeks of ancient times slept in beds that were quite similar to those in Rome, but with an emphasis on comfort. Klines appear like a modern-day sofa or daybed, but with a raised headboard attached. These unique sleeping surfaces had a wide range of uses from sleeping and reclining to sleeping.

Wealthy Greeks were set apart from common citizens by owning more than one kline - each with its own purpose depending on the intended use. Naturally, these upscale klines were typically decorated with lavish upholstery and precious materials.

For many years, most of the eastern world continued to sleep in beds that placed directly on the ground. In Japan, bed rolls (or futons) were also placed directly on the ground and preferred for their simplicity. This preference wasn’t just in the name of style though; Japanese homes were typically very small, so having a low profile, lightweight mattress made it easy to roll up and stow away when not in use.

Like with other ancient cultures, the Japanese favored cotton as the material of choice for mattresses. These mattresses were filled with long staple cotton which prevents bunching and lumps from developing over time.

Much like in Japan, citizens in early Chinese history slept on cotton bed rolls that were stored away during the day. But in contrast, early Chinese culture took their beds to the next level - literally! During the 11th century BCE, they developed the kang, which is a large, elevated bed system that is made from bricks or clay. The advantage of using brick or clay meant that they could be heated to keep warm during the colder times of the year.

In the subcontinental regions of India, Pakistan, and Bangladesh, daybeds (or charpoys) were a common style of bed as an alternative to simple cotton mattresses. A charpoy is a type of rope bed that is simple in terms of construction, but can be aesthetically more elaborate depending on the fibers used and type of weave. The Charpoy was particularly popular for its portability as it was sometimes necessary to transport the bed to another home.

Beds remained mostly simplistic during the Medieval time period. The construction was still wood with mattresses that were stuffed with straw, hay, or similar materials. Poor citizens in this time typically only slept on piles of hay or leaves that were placed directly on the ground rather than elevated in what was called a bed box.

It wasn’t until the 12th century that beds became more decorative. For some elite wealthy citizens, bed frames were a symbol of wealth, crafted with intricate carvings and paintings and topped with embroidered mattresses. In the latter half of the Medieval period, mattresses were stuffed with down and became more popular and accessible to the majority of people. 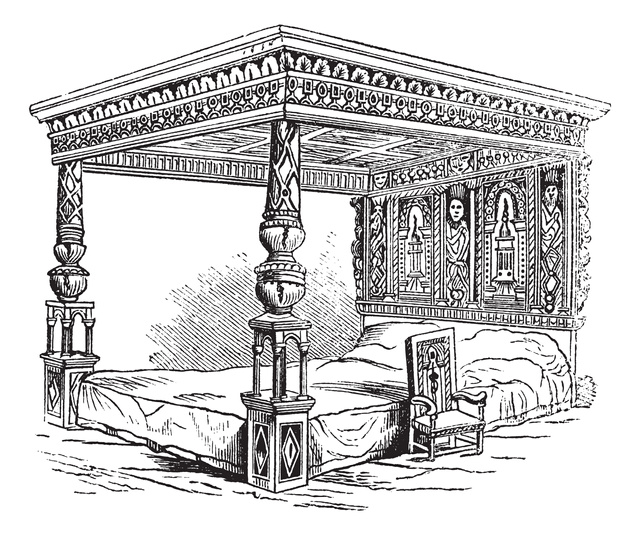 The elite were also trendsetters when it came to beds. Originally standard practice for lords and ladies, the general populace soon adopted the use of curtains hung around their beds to keep out drafts and pests. Curtains were of course, also an added layer of privacy which was most welcome as it was not uncommon for multiple people to sleep in the same room.

By the Renaissance era, beds became vastly ornate and elaborate compared to the early eras of history. In the 15th century, Western Europe developed a style consisting of wooden headboards with two columns at the foot of the bed. This supported a canopy known as a tester which resulted in a grand looking arrangement with curtains enclosing all four sides of the bed. This larger than life styled bed often spanned 8’ by 7’ allowing several people to sleep in one bed.

The design of beds became even more elaborate during the 16th century and peaked in the 17th and 18th centuries. The wealthy continued to serve as status symbols and increased in size and added more expensive curtains to their four-poster beds.

As societies entered the 19th century, elaborate statement beds fell out of favor and the popularity of four-posters fell out of style with a new emphasis on practicality. For instance, box springs were introduced as a way to reduce motion and prevent lumps from forming within the mattress. As the industrial age boomed, metal frames became more common in lieu of wooden frames. By the beginning of the 20th century, mattresses and bed frames could be mass-produced which meant comfortable mattresses were more accessible to nearly every class in society.

Mattresses of this time were also undergoing big changes with one of the most notable developments being the introduction of the innerspring mattress by Heinrich Westphal in 1871 and the invention of pocket coils by James Marshall in 1900.

Dramatic innovations continued to take off during the 20th century, officially ushering a new era of mattress and bed options. Latex foam - a completely different type of mattress material for its time - was invented by John Boyd Dunlop in the 1920s. With the help of scientist E.A. Murphy, the process was refined and the first latex mattress was made in 1931.

Another major development in the mattress industry was the introduction of polyurethane foam. Although polyurethane foam is a synthetic material that is infamous for its unpleasant off-gassing, it quickly displaced natural latex since it was significantly cheaper to manufacture.

The increased use of polyurethane soon gave way to memory foam (a type of polyurethane foam) which was originally created by scientists for NASA in the 1970s. Initially, memory foam mattresses were marketed toward the general public as somewhat of a novelty sleep product, but became a common choice for many Americans as the cheaper alternative.

Despite the fact that latex foam overall fell out of favor during the latter half of the 20th century, it has recently grown popular once again as consumers are increasingly interested in creating a sleep environment that is healthier and more eco-friendly.

Much like with fashion and music, old trends can become popular again. Although the past three decades have shown that the Western world generally prefers larger, more plush style mattresses, there have been signs of reviving a more minimal and simplistic style of bed.

From low-profile bed frames to mattresses with simple layers and materials, there has been a steady increase in returning to the roots we share with our ancient ancestors. Fortunately, no matter where you live, there are a staggering amount of choices to fit every preference that have been influenced by eras and cultures all around the world.

All of our products can be returned for free, no questions asked.